In these lectures, we introduce

We studied previously the following questions:

-wise indistinguishable, that is, any projection over

have the same distribution. We can ask similar questions:

Those question are actually equivalent to ones related about approximation by real-valued polynomials:

be a function, and

real polynomials. We will denote the right-hand side

We will now focus on proving the theorem.

Note that one direction is easy: if a function

is closely approximated by a polynomial

comes from the fact that

The general proof goes by a Linear Programming Duality (aka finite-dimensional Hahn-Banach theorem, min-max, etc.). This states that:

We can now prove the theorem:

The proof will consist in rewriting the sides of the equality in the theorem as outputs of a Linear Program. Let us focus on the left side of the equality:

We will also use the following, which can be proved similarly to the Vazirani XOR Lemma:

-wise indistinguishable if and only if:

is the Fourier basis of boolean functions.

can then be rewritten:

Following the syntax of LP Duality stated above, we have: 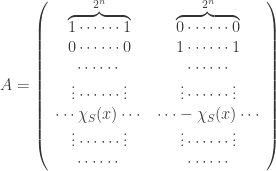 where the rows of

except the first two correspond to some

We apply LP duality. We shall denote the new set of variables by

We have the following program:

, the objective becomes to minimize

, while the second set of constraints can be rewritten:

is an arbitrary degree-

polynomial which we denote by

. So our constrains become

ranges over all degree-

polynomials, and we are trying to minimize

, but when you add

1.4 Approximate Degree of AND.

Let us now study the AND function on

the minimal degree of a polynomial approximating

We will show that

To prove this claim, we will consider a special family of polynomials:

The Chebychev polynomials (of the first kind) are a family

of polynomials defined inductively as:

Those polynomials satisfy some useful properties:

follows from a direct induction. For a nice picture of these polynomials you should have come to class (or I guess you can check wikipedia). We can now prove our upper bound:

We construct a univariate polynomial

will be close to

. Then, we can naturally define the polynomial for the AND function on

, which also has degree

to be close to

has Hamming weight less than

, while being close to

(by definition of AND). This will conclude the proof.

Intuitively, this uses the fact that Chebychev polynomials are bounded in

More precisely, we have:

be a polynomial that approximates the AND function with error

We have the following result from approximation theory:

be a real univariate polynomial such that:

To prove our claim, it is therefore sufficient to check that

satisfies conditions 1. and 2., as we saw that

This concludes the proof.

Consider the AND function on

be their composition (which outputs the AND of the

It is known that

. To prove the upper bound, we will need a technique to compose approximating polynomials which we will discuss later.

Now we focus on the lower bound. This lower bound was recently proved independently by Sherstov and by Bun and Thaler. We present a proof that is different (either in substance or in language) and which we find more intuitive. Our proof replaces the “dual block method” with the following lemma.

bit positions; let us show that they have the same distribution in

; call the other blocks light.

There are at most

heavy blocks by assumption, so that the distribution of the (entire) heavy blocks are the same in

Furthermore, conditioned on any outcome for the

, the light blocks have the same distribution in both