For more than 20 years we’ve had

. There have been several “explanations” for the lack of progress [AK10]. Recently Chen and Tell have given a better explanation showing that you can’t even improve the result to a better

without proving “the whole thing.”

Say you have a finite group

and you want to compute the iterated product of

Suppose you can compute this with circuits of size

. Now we show how you can trade size for depth. Put a complete tree with fan-in

on top of the group product, where each node computes the product of its children (this is correct by associativity, in general this works for a monoid). This tree needs depth

. If you stick your circuit of size

at each node, the depth of the overall circuit would be obviously

. If you are aiming for overall depth

Hence we have shown that proving bounds

The above is not the most efficient way to build a tree! I am writing this post following their paper to understand what they do. As they say, the idea is quite simple. While above the size will be dominated by the input layer, we want to balance things so that every layer has roughly the same contribution.

Let’s say we are aiming for size

and let’s see what depth we can get. Let’s say now the size is

. Let us denote by

the number of nodes at level

being the root. The fan-in at level

so that the cost is

as desired. We have the recursion

The solution to this recursion is

So that’s it. We need to get to

nodes. So if you set

, we have exhibited circuits of size

. So proving stronger bounds than this would rule out circuits of size

Added later: About the recurrence.

we have the following recurrence for the exponents of

we need to get to

I am not sure I need more evidence that making progress on long-standing bounds in complexity theory is hard, but I do find it interesting to prove these links; we have quite a few by now! The fact that we have been stuck forever just short of proving “the whole thing” makes me think that these long-sought bounds may in fact be false. Would love to be proved wrong, but it’s 2019, this connection is proved by balancing a tree better, and you feel confident that P

Spending your life staring at a (traditional) computer screen may not be ideal for your eyes (and more); so since an early age I have been dreaming of a “purely mechanical” monitor that you could stare at more or less indefinitely, like at parchment.

This dream is now becoming reality, sort of.  The Dasung E-ink monitor has no backlight and instead reportedly uses electric flows to move ink droplets.

After some consideration, spending yet more hours reading reviews online and watching youtube videos about it sealed the deal.  I shelled out $1300 and bought the thing.

I have had it for a few days now and I am sort of happy. I went from using a giant 30-inch monitor far away (my theory for avoiding eye strain) to using a ~13-inch monitor at pretty much the same distance as reading a book. I had to avoid sunlight, now I seek it (see the picture). 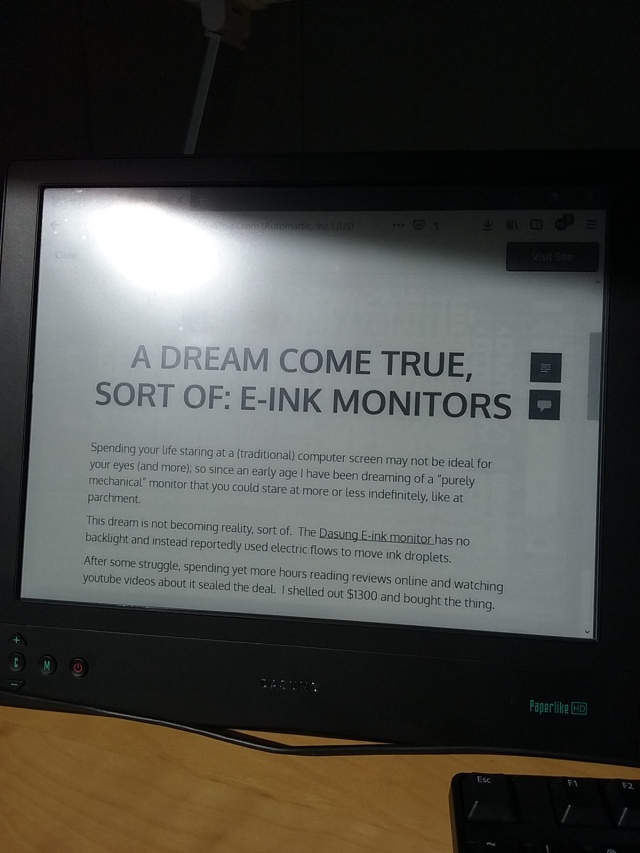 The monitor makes your computer look like Windows 3.1 on a monochrome screen from the 80’s. The refresh is slow, and there is a ghosting effect, meaning there are shadows of previous images — which you can clear out. Also, it’s 4:3 instead of 16:9, which is a pain because it means I have to change resolution when I am forced to use my other monitor (for example if I have to check colors — the screen is gray-scale, did I mention that?). It makes browsing the internet quite painful, which is a nice side effect.

Contrary to advice, I am using it as my primary monitor. I am sort of happy with it and don’t regret buying it. I have started writing and reading papers with it and it’s working well enough.

I think as soon as the technology improves the market for these things will be huge.  Already having a 17″ monitor in 16:9 ratio, ideally touch-screen, even if gray scale, would be a dream come true.