In this lecture we study lower bounds on data structures. First, we define the setting. We have

bits of data, stored in

bits of memory (the data structure) and want to answer

queries about the data. Each query is answered with

probes. There are two types of probes:

The queries can be adaptive or non-adaptive. In the adaptive case, the data structure probes locations which may depend on the answer to previous probes. For bit-probes it means that we answer a query with depth-

Finally, there are two types of data structure problems:

In this lecture we focus on the non-adaptive, bit-probe, and static setting. Some trivial extremes for this setting are the following. Any problem (i.e., collection of queries) admits data structures with the following parameters:

Next, we review the best current lower bound, a bound proved in the 80’s by Siegel [Sie04] and rediscovered later. We state and prove the lower bound in a different way. The lower bound is for the problem of

Problem 1. The data is a seed of size

is defined to be the

-th bit of the sample.

The question is: if we allow a little more space than seed length, can we compute such distributions fast?

Theorem 2. For the above problem with

It follows, that if

then nothing is known.

. We have the memory of

bits and we are going to subsample it. Specifically, we will select a bit of

The intuition is that we will shrink the memory but still answer a lot of queries, and derive a contradiction because of the seed length required to sample

For the “shrinking” part we have the following. We expect to keep

memory bits. By a Chernoff bound, it follows that we keep

bits except with probability

For the “answer a lot of queries” part, recall that each query probes

bits from the memory. We keep one of the

queries if it so happens that we keep all the

bits that it probed in the memory. For a fixed query, the probability that we keep all its

We claim that with probability at least

queries. This follows by Markov’s inequality. We expect to not keep

queries on average. We now apply Markov’s inequality to get that the probability that we don’t keep at least

queries is at most

, then there exists a fixed choice of memory bits that we keep, to achieve both the “shrinking” part and the “answer a lot of queries” part as above. This inequality is true because

. But now we have

bits of memory while still answering as many as

The minimum seed length to answer that many queries while maintaining

. Therefore the memory has to be at least as big as the seed. This yields

from which the result follows.

This lower bound holds even if the

memory bits are filled arbitrarily (rather than having entropy at most

). It can also be extended to adaptive cell probes.

We will now show a conceptually simple data structure which nearly matches the lower bound. Pick a random bipartite graph with

nodes on the left and

. We answer each probe with an XOR of its neighbor bits. By the Vazirani XOR lemma, it suffices to show that any subset

memory bits has an XOR which is unbiased. Hence it suffices that every subset

has a unique neighbor. For that, in turn, it suffices that

has a neighborhood of size greater than

(because if every element in the neighborhood of

has two neighbors in

has a neighborhood of size

). We pick the graph at random and show by standard calculations that it has this property with non-zero probability. 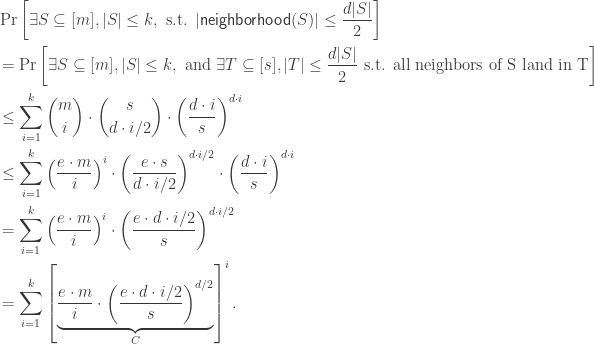 It suffices to have

, so that the probability is strictly less than 1, because

. We can match the lower bound in two settings:

Remark 3. It is enough if the memory is

-wise independent as opposed to completely uniform, so one can have

. An open question is if you can improve the seed length to optimal.

As remarked earlier the lower bound does not give anything when

is much larger than

. In particular it is not clear if it rules out

. Next we show a lower bound which applies to this case.

bits to be a seed for

. The queries, like before, are the bits of that distribution. Recall that

Proof. Every query is answered by looking at

queries are answered by the same 2-bit function

of probes (because there is a constant number of functions on 2-bits). There are two cases for